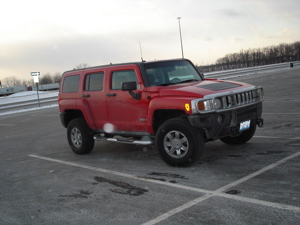 Alright .. we’re already going back two weeks .. but I’ve got to write about the adventure .. before I forget the details. I hit the road for Ohio on January 31st. My first stop was Indianapolis to meet up with my good friend, Tom Rozoff. He was in the area performing his school show. I arrived around 8pm and we headed over to Applebee’s for some dinner. We talked shop .. and Tom refreshed my memory on some long forgotten tricks that I should add to my act. It was time for some TV and then off to bed.

It was cold out when I left the hotel .. heading east to Dayton. Next stop was a little town called Vandaila to visit another long time friend, Mrs. Sheppard. This time around it would be a bit different as her husband, Walter had passed away last summer. I’ve written about him many times .. and I wasn’t sure how I would do without him there. Mrs. Sheppard was still the same .. a little thinner, but still as fun as ever. We had a nice visit and remembered Walter, he was very special to both of us. The house was arranged a little different and the shop out back was closed. There were so many projects left unfinished .. it just kills me, all those unfinished dreams. I’ll never forget all he taught me over the years .. he changed my life. I left without shedding a tear .. and I gave Mrs. Sheppard a hug good-bye until next time. I knew she was lonely and I didn’t want to leave her sad.

It was time to hit the road once again, this time Columbus for the Magi-Fest Convention. This is were the fun begins …
Steve

Last week I made my annual pilgrimage to the little town of Colon, Michigan. Only people in the magic world would know why I'd be...read more →

And the Rain Came Crashing Down …

As I was staring down at her .. I thought to myself, this just can't be .. this isn't how the story is suppose to...read more →