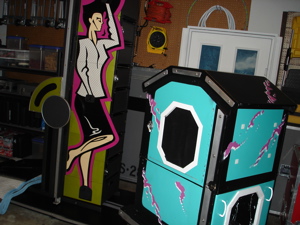 Of course I didn’t have my camera handy, but there was the jumpsuit on the counter. Let me explain .. I was at the shop that does all my leather work. I’m getting some new pieces made and I know Elvis has been there before .. but this time, his stuff was there. I heard some voices in the back .. I knew he was near. He was having some repairs made to his outfits. We finally met .. his has was as black as coal, and he’s wearing glasses now. It’s funny .. but he’s still working after all these years. A moment later .. Elvis had left the building.

In other news .. things are warming up out here. Mother has actually driven to Kmart, on her own .. twice this week. She hasn’t been behind the wheel since last November and relies on me as her chauffeur. I don’t mind too much .. as long as she’s not crabbing .. over the years I’ve toned most of it out .. I have to.

I’ve been working on props lately .. repairs, repainting .. sewing, yes .. I do it all. Above you’ll see our Inside- Out illusion along side the very rare Slicer. We’re actually preparing this illusion for out next concert show .. I’ll keep ya posted on that. My friend Dan is working in Athens, Greece right now .. I’m sure he’ll have some interesting stories from that adventure. So far he hates it .. but he’s stuck there for another month. Oh .. almost forgot, but our former Chezababe, Quissy is about to have her first child. I think Greg is spending the night at the hospital. They live in Vegas .. so it will be a while before I see the new little one. They don’t know if it’s a boy or a girl yet or an Alien for that matter .. but my money is on a little boy.

And the Crowd Goes Wild …

Just the other day was our annual, triumphant return to the Naperville Riverwalk. This was part of the Naperville Park District Lunch Hour Series. The...read more →

Nothing is better than the smell of fall in the air and an extra hour of sleep. Â If you haven't done so already we turned...read more →

Your Head Would Spin …

I've said many times before that I have not led a very normal life. Â Looking back on what I've done in the past few months...read more →