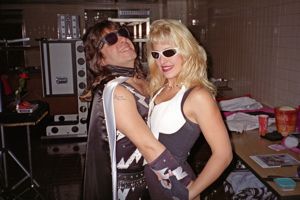 Another month has flown by and this should be my busy season. Â Although things seem to be picking up Â .. they are far from seasons past. Â Back around 1994 we were running around sometimes doing up to five shows a day. Of course not every one can pull that off .. but, we did. Sure, I did have some help and when we were rolling .. we were like a well-oiled machine. Â Back then there were four of us that would travel together. Â Most of the time it was my brother Jeff working sound and lights, my onstage sidekick “Flounder” and my girlfriend Tina as the box-jumper. For those not in the know, box-jumper is an old school term for the girl getting in and out of boxes. In my show they are better known as the Chezababes .. and yes, there have been many over the years. Believe me this was no easy task .. especially out here when the winter weather can really wreak havoc on the driving conditions. As soon as we would arrive to a gig I would check things out. In a matter of minutes I would decide what equipment we would pull out of the van and the set-up would begin. Once the cases were in my brother and Flounder would set-up the sound, lighting and backdrops. Tina would set most of the show and the costumes. I was in charge of setting the illusions and solving any problems that arose. The show was always the easiest part of the day .. its the load-in and load-out that was the most work. The show ran like clock work. Once and effect or illusion was done, it would go backstage and get packed. By the end of the show just about everything was ready to go. The sound and lights would come down as Tina and I were signing autographs. Â We were back in my 1982 Chevy van and on our way to the next gig. This of course was long before Mapquest and any type of GPS. Â We did this hundreds of times .. it was pretty crazy. Â Above you’ll see us goofing around backstage .. we had a lot of fun times together. Â Tina was amazing on and off stage. Â Her smile lit up the room, her laugh was contagious .. Â I’ll never forget her. These days I’ve had to keep things much simpler. Most gigs are just one of the girls and myself. Â They have to pull double duty and run the sound during the show. Â This of course helps keep the cost down as most budgets have been slashed. Â We’re still happy to work with a smaller show, it’s just a matter of adapting to our market. Let me just take a second and wish you and your family the best of times this holiday season. Â Christmas, Hanukkah, Kwanzaa .. whatever you’re into. Â As long as it’s peaceful, I’m cool with that … Steve

The past week or so I've been going back and forth to visit my mother at the hospital. The winter is very rough on her...read more →

Road Trip: Day One and a Half …

Alright .. we're already going back two weeks .. but I've got to write about the adventure .. before I forget the details. I hit...read more →