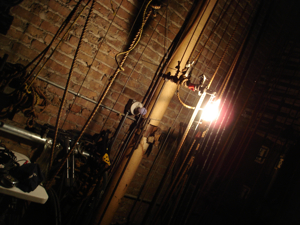 Yes, it’s been much too long since my last post. Â If you’re reading this .. then you’ve survived the holidays and that’s a good thing. Â January is a month to catch up on things for most of us … so let’s see what I can fill you in on. Â My good friend Terry Evanswood and his crew came up to perform at the Arcada Theater in St. Charles, IL. Â I’ve worked with Terry on and off stage many times over the years. Â We basically grew up together and he’s one of my best friends.

The show was scheduled for the second weekend of January. Â First show on Saturday evening and a matinee on Sunday. Â For those who don’t know what all is involved .. let me try to explain.

After the truck is loaded with props and costumes, Terry and his cast made the twelve hour drive from Pigeon Forge, Tennessee. Â  They arrived late in the evening on Friday night. Â After a few hours sleep, they arrive at the theater around 9am. Â The load-in begins and I arrive soon afterwards with my equipment. Â I’m there with additional illusions and special effects for the show.

It seems early enough in the day but, problems begin to arise. Â The main curtain won’t open or close .. and the clock is ticking. Â The theater is nearly 100 years old … and in many ways it shows it’s age. Â We have to deal with it .. and fast. Â A few hours later the curtain is repaired .. or so we think, and rehearsal begins.

My responsibilities include pulling the ropes, moving and setting the illusions, lighting .. and special effects. Â Let’s just say .. I could have used an extra set of hands. Â  I had a long list of cues that were simply scribbled down on some scrap paper. Â 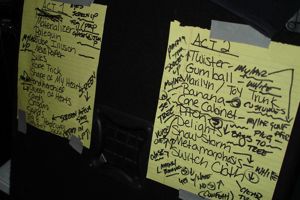 The props are Â set and we’re ready to run through the show. With the first cue, we discover that the curtains are off track once again. Â This time they’re stuck in the closed position. Â Now were facing a real dilemma .. we may have to cancel the show tonight.

After a brief lunch break, I decide to take a closer look at the cause of the problem. Â I soon discover the rope is off the pulleys on stage right. Â Sounds like a simple fix but, Â it’s up about 35 feet in the air. Â I’m not much for climbing a ladder so, we manage to get the curtain open and come up with plan B. Â  This is an old movie house so the screen can be brought up and down. Â Sounds simple enough .. but, it’s on ropes and it’s heavy. Â  This of course would become one of my tasks .. and not an easy one.

Now we’re only hours away from show time .. and no time for a full rehearsal. Â  This is often the case but, because we are all professionals .. we pull it all together. Â This time around .. I even had my doubts but, once the show begins .. we made it look as smooth as could be. Â Sure there were a few missed cues but, Terry is so comfortable on stage .. he makes it all work out. Â He recently completed a run of 1500 show in Pigeon Forge in just three years. 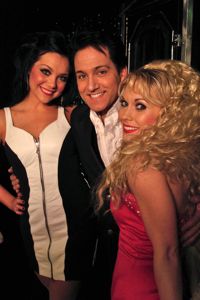 The show runs a bit long and I think I made it home around midnight or so. Â After a bit of sleep it was time to do it all again. Â The matinee would be a lot easier on all of us as we’re already set up and we’ve got the bugs worked out from the night before. Â The house is nearly full and the show goes like clockwork today. Â Terry and the cast sign autographs afterwards while the crew begins to strike the show.

A few hours later we’re loading the truck in the bitter cold. Â We all worked hard and worked together as a team. Â The hours are long and we faced many challenges along the way .. but, it’s all part of the game. Â I can’t think of anything more rewarding than working with friends like Terry and his team.

A Vent and his Dummy …

In the performing arts a "vent" is short for ventriloquist .. you know, while keeping your lips closed you do the talking for the "dummy."...read more →

I've been putting this off .. a year to be exact. I never finished the sad story about losing my friend Tina. Today was a...read more →