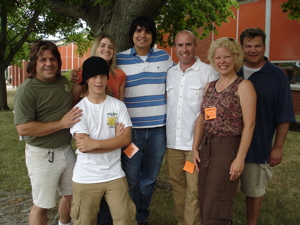 So, I’m back from my little adventure to Colon, Michigan .. and of course it was a fun time. My good friend, David Seebach, came along for the ride and we stayed at a nice hotel in Sturgis. This year was Abbott’s 70th Get-Together .. and it was a hot one. There of course are lectures and contests during the four day event, but most of my time is spent backstage with the acts. I’ve been part of the stage crew now .. for like 15 years. Some of the talent was really amazing .. and some, to tell you the truth .. I couldn’t bear to watch. I guess they have something for everyone .. that’s one way to look at it.

Friday night my buddy Jason Bishop worked the stage. He’s got one of the coolest illusion acts out on the road these days, so if you get a chance check him out. Not many other magicians would promote another .. but, I really like this dude. His girl, Kim is really something else too .. she runs the show from backstage and even drives the truck .. she’s really an amazing girl. Anyway .. I did get to spend a lot of time with both of them and I gave them the tour of the town including the cemetery. My little friend Blade was with for most of the fun .. including skippin’ stones near Blackstone Island. The rest of our time was spent in the dealers room and later at night in Five Star Pizza. Nothing is quite like spending some time with fellow Magi in my home away from home.

So, I had some time open on Saturday afternoon and decided to go into the city to visit a couple of the few remaining "brick...read more →

The Sound of Thunder ….

Today .. finally, some rain came through our area .. not much, but we'll take what we can get. It's about 9am and I hear...read more →