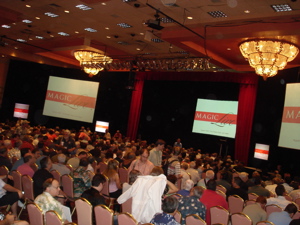 It looks like summer is already behind us and I’m still trying to get caught up. Since my last entry, I spent a few days in the Wisconsin Dells then a day later I was in Vegas for the Magic Live! convention. As soon as I returned home, it was back to work for me.

Magic Live! was a gathering of the top magicians from around the world .. and yes, somehow I slipped under the radar. There were lectures, shows and a few surprise guests including Jason Alexander from the TV series “Seinfeld.” He actually had a fresh new perspective on magic .. from an actors point of view. I met up with some good friends who live in Vegas now and some new friends along the way. The weather was a bit warm, over 100 degrees during the day. I’m told it’s a dry heat, kinda like sticking your head in an oven .. but what do I know? My flight home was delayed because of some huge storms in Chicago. We circled Kansas City for a while until we could land. The airport was virtually closed and there were people everywhere .. it was quite a sight. Of course, I enjoyed a couple of days off and it was just the thing to get me fired up again. I’ve got some new exciting projects underway and you’ll be the first to find out.

Nothing gets my blood boiling faster than watching Drew Peterson spew his filth on national TV. The only reason he and his sidekick lawyer are...read more →

Question: Where does a 100 pound German Shepherd sleep? Answer: Anywhere he wants. Now is as good of time to write a quick note. Â I...read more →

Wow .. I left off last month burning the candle at both ends.Â  Not only was I taking care of my mother but, I was...read more →