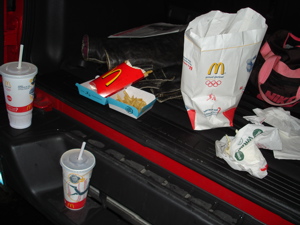 Again .. a few weeks have passed since I wrote, so here goes nothing. My mom is in Florida right now .. I still have one more week of freedom. You see most of my week is driving her back and forth to doctors appointments, shopping .. stuff like that. I never knew I was going to become a chauffeur later in life .. but then again, she carted me around for the beginning of my magic career. We would load up the Delta 88 with a couple of Kmart footlocker trunks and I was off to conquer the local birthday magic market. I still run into young adults that say I was at their tenth birthday or a Blue and Gold dinner .. it’s alway pretty fun to hear the stories.

Anyway .. I should have tons of free time .. but, a week has already flown by. I told my mom I was going to build a room addition while she was away. She liked that one .. and knew I was just joking. I did manage to take some time off for a ride up to Milwaukee with the boys. Joining me was fellow magicians Paul Lee and Mike Di Domenico. We were heading up north to see the premier of “Wohsgicam.” This is my friend, Brett Daniels latest project .. and it’s a really cool new concept in magic. Kinda like watching the “Prestige” live on stage .. a murder mystery with classic magic woven in. It was a long drive on a rainy night .. but we made it just in time. It was great to run into some old friends and some new. Afterwards we were a bit hungry and made a stop in Racine, Wisconsin for a late night snack. The drive thru was open .. and we opted to eat in the parking lot. Nothing like fine dining at 2am.

Can you believe it's almost been a month since I wrote last .. neither can I.Â  To tell you the truth .. there's been plenty...read more →

I Want My Two Hours Back …

If you haven't been locked in a closet for the past week or so .. I'm sure you've seen David Blaine on the news with...read more →