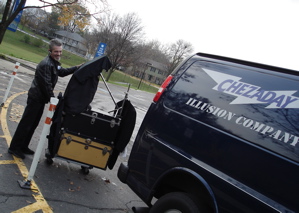 Let’s just say it’s been a bit cold out here in the midwest .. we’ve actually warmed up to 3 degrees.Â  I’m not joking .. the other day it was well below zero, not including the wind chill.Â  I just got in from a short walk with Rex and I’ve got the Bears/Packers game on right now.Â  It’s Monday Night Football in Chicago .. a stadium full of fans sitting out in the cold.Â  They truly have got to be out of thier minds .. but the game goes on.Â  In the background I can hear my brother coaching the team from the comfort of his bedroom. It’s pretty funny when he gets all worked up.Â  I can deal with the snow .. and we’ve had some of that already, but the cold is killing me.Â  Anything above freezing would be fine around now.

As usual I’ve got some catching up to do .. and I’ll have to look back to where I left off a few weeks ago.Â  December has been a good month considering how things are overall with the economy.Â  It’s nothing like it was .. but I’ll always find work.Â  We had a string of shows earlier in the month, both Val and Angel took turns sharing the stage with me.Â  I’ve still got a room full of gifts that need wrapping and Christmas is just two days away!Â  I’ve got a fun story to share with you from years ago … we’ll get to that next time.

Now let’s go back to the middle of November .. is time travel actually possible, I’ve often wondered.Â  Don’t worry .. that’ not where this is going.Â  Anyway .. I think it was a Friday,Â  I had the day off and was just trying to catch up on things around the house .. that’s when the phone rings.Â  It’s my friend Paul, and again .. his mini-van won’t start.Â  Now I’ve actually bailed him out a couple times before in this very same situation.Â  Of course he would do the same for me .. that’s a fact.Â  So, he had a small birthday show not too far from his house.Â  We loaded up my van, did the show and he treated me to Charley’s … I couldn’t pass that up.

Little did I know a few weeks later .. my van wouldn’t start when we arrived to a show.Â  A little ironic .. but true.Â  We’re into the first week of December now and I’ve got a show with Val about an hour away.Â  After checking out the room we were performing in, I went to move the van to unload.Â  Sure enough the temps dipped pretty low that night .. and it click, click, click,Â  it was dead.Â  Now I was loosing time as I was performing close-up magic in an hour.Â  The van stayed put and we rolled everything down a long hallway.Â  After the show I crossed my fingers … and it started up.Â  I let it run while we gathered our things for the journey home.Â  I lucked out that time around .. I still had a number of shows on the weekend.Â  Overnight we had more snow but, I needed a new battery first thing.Â  My van is already five years old .. and sure enough, that’s about all you get out of the original battery.Â  This time I wasn’t playing around and went for the Die Hard SUV with 875 cold cranking amps .. I should be Ok for quite some time.Â  I made it throught the weekend without any further complications.

I’ve already rambled on way too long .. I promise I’ll pick up where I left off in just a few days.Â  Until then .. stay warm, stay healthy and Merry Christmas!

This ones a little tough on me .. I lost one of my best friends in the world yesterday. He was well known in the...read more →

This is actually the second time I'm writing the very same entry .. why you ask? Well the first version of this got lost somewhere...read more →

Here, There and Back Again …