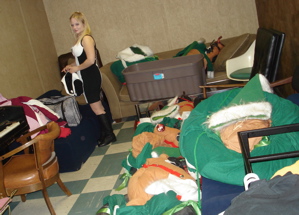 It’s that time of year where we’re out all day going from one show to the other. I live for the show .. it keeps me sane, but yesterday was a bit difficult on many levels. First thing .. my mother is in the hospital for a brief visit, I brought her in on Thursday. She usually comes down with something this time of year .. but apparently she almost died on Saturday. I was just heading out the door for my first show and got a message from my brother. I tried calling three or four times that same morning but it just rang. I figured they were just drawing blood or something so she couldn’t answer. She’s in critical care but doing better .. wonderful. It is very hard to concentrate on a show with this kind of stuff on your mind .. not easy at all, but the show goes on. We arrive in plenty of time to set up .. and then I run into a pretty major problem. The sound system isn’t working .. no sound at all. For a crowd of over 500 screaming kids .. this is a potential disaster. We continued the set up .. hoping my luck would change. Only minutes before the show begins .. I get it working again. The show went off without a hitch .. so we packed it up and went to see mother. She was doing better .. hooked up to all kinds of machines and stuff, but awake and alert. We were on a schedule .. so it was time to grab a quick bite to eat and hit the road.

Our next stop was the Sabre Room once again .. nothing like spending time with Rudy and the Sabrettes. Valerie was with me for the day .. and she was good up until it was time to suit up for the evening show. Thats when the complaining begins .. and never ends. Apparently I can’t do anything right .. and the outfits are hideous and on and on and on. It never ends .. and its definitely not the time to get me riled up … but it never fails, she does it every time. I do my best to ignore her .. but she doesn’t let it go. The show goes on .. and I’ve still got plenty on my mind.

It’s about 10:30pm and we’re on our way home, I call to check up on mother and she’s sleeping the night away .. that’s a good thing. Knowing that she’s doing better .. I too, will be able to get some sleep myself … it’s been a long day.

Beyond Belief … Part One

As I write fall has settled in, its just about 60 degrees out and its been raining on and off all day.Â  The leaves are...read more →