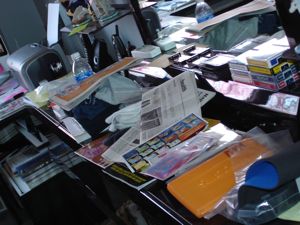 Can you believe it’s almost been a month since I wrote last .. neither can I.Â  To tell you the truth .. there’s been plenty going on and I’ll try to get it all in.Â  We left off at the end of April .. I’m looking at my calendar to go over things.Â  Let’s see .. Britney Spears was in town for two shows,Â  I missed that.Â  She was even performing some illusions in the show .. and she really did a great job.Â  I always knew she would be an outstanding box-jumper .. that’s what we call the girls in the show.Â  Actually in my show they’re called Chezababes .. and I’ve got some news on two of our girls in just a bit.

Once again I taught a Magic Mini Course with Angel at Beebe Elementary School here in Naperville.Â  The kids were well behaved and I think they really enjoyed learning some magic to show their friends.Â  At the very same time my mother was out of town for two weeks .. it was more like a vacation for me to tell you the truth.Â  I’m pretty much her personal valet 24/7 so .. I finally had some time to myself.Â  I had some shows here and there so things are finally picking up.Â  I also started taking some private lessons at the Apple Store to learn how to use this thing.Â  It’s called One to One and it’s been very helpful.Â  I’m a visual learner and I just need someone to hold my hand while I learn.Â  I’ve actually managed to transfer my iTunes and iPhoto library over to the new iMac.Â  For most this is no big deal .. but for me, it’s huge.

In my time off I’ve been back and forth to different vets with my little ones.Â  Rex caught some bug and wasn’t feeling very well so, I had to get him some meds and alter his diet.Â  He recovered in just a few days and is back to his old self.Â  My little girl Jenna, a blue & gold Macaw, injured one of her talons and that was pretty messed up.Â  She wouldn’t put any weight on it and was very limited in her mobility.Â  This really tore me up .. I didn’t know what to do.Â  We went to our vet and got some meds for her.Â  These were to be administered orally .. no easy task when you’re dealing with a parrot.Â  I think I would up wearing most of the medication as she shook it from her beak.Â  After two weeks she’s seems to be just fine.Â  Today I gave her a shower and she’s waiting to play for a few minutes as it’s almost her bed time.Â  It really broke my heart to see her suffer .. I couldn’t even think straight.

In other news .. my little brother turned 39 on May 7th.Â  Just last weekend he did something to his knee and it looks like he might need surgery this time around.Â  Not only do I have to cart my mother around .. now I’m his personal chauffeur.Â  He’s been spending much of his time on the couch and catching up on a stack of DVDs I gave him for his birthday.Â  I think we’ll watch the “Wrestler” sometime this weekend.

Mother returned from Florida with a touch of a cold or flu.Â  This of course is just as the Swine Flu is spreading across the U.S. 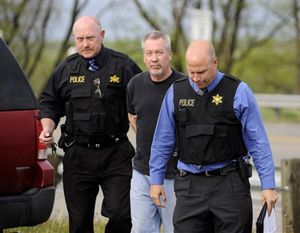 She’s fine now .. even took her out to Kohl’s tonight,Â  so if she’s shopping .. we’re OK. My friend David Seebach was in over the weekend and we had a nice time working on a few ideas after his show in Elmhurst.Â  Almost forgot my buddy Drew Peterson is finally spending some quality time in jail.Â  This of course is a sore subject but, I’m sure he’ll be out on bail in a matter of time.Â  It’s actually kind of nice that he’s behind bars .. this way I don’t have to hear about him in the news for a change.Â  I do feel bad for the kids though .. they will ultimately suffer over the situation.Â  I guess he should have kept better track of his wives.Â  I’m biting my tounge of course.Â  Stacy never deserved her fate,Â  she was just a young girl looking for a better life.Â  I’ve known her since she was just a little girl .. it’s all very sad.

Yes, there is some good news to leave you with .. our very own Chezababe Angel got engaged over the weekend and Greg and Quissy had their second child just the other day.Â  Little Sean was born in Las Vegas, Nevada.Â  Oh .. and before I forget, my friend Carol turns 29 tomorrow.Â  She’s fast approaching 30 .. and you know it’s all down hill from there! Can you believe .. my birthday is coming up in just a few days, on the 23rd.Â  Of course I can’t reveal my true age .. some things are better kept secret.

I guess you can say I’ve been a bit busy … you wonder why it takes me so long to catch up on things.Â  Your head must still be spinning .. right??

I didn't get a chance to write since last week .. but I did have a short road trip. My good friend, Tom Rozoff was...read more →

Open Up and Say Ah …

Better Than the Alternative …

Things are pretty much back to normal around here .. mother is on my case as usual and things keep breaking around the house. Today,...read more →