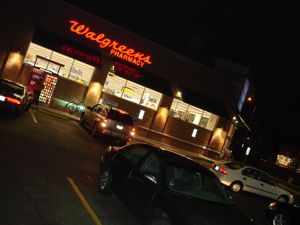 Some days are busier than others .. my previous post is a good example of just that.Â  The following day nothing eventful occurred other than getting some deep dish pizza at Gino’s East.Â  I had mom and Val with and we met up with my brother Jeff and his friend Payne.Â  The original plan was to grab some dinner in downtown Naperville but, since the weather was nice everybody and their brother were out .. including me.Â  There was a huge line outside of Leonardo’s and the parking is difficult to say the least.Â  We headed south on Washington and found our destination.Â  The pizza was awesome and we even had a little left to take home.Â  Before we called it a night .. I needed some chocolate milk.Â  I don’t smoke or drink .. so, this is all I have .. I’m sure you understand.Â  I told mother it was our big night out and we turned into the Walgreens parking lot.Â  Still she enjoys cruizing the isle with a little cart picking up more junk.Â  I headed right to the cooler and got my fix.

A few days later I would drop mother off at the airport.Â  She’s going away for two full weeks!Â  I guess I shoudn’t sound so excited .. it will be more like my vacation than hers.Â  Anyway she’s well enough to travel and visit with friends out there .. so that’s a good thing. I on the other hand won’t know what to do with all this free time .. I’m sure I’ll find something to do. 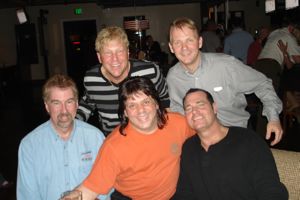 The following evening was the annual Magic Flea Market in the Chicago area.Â  I arrived a little later as I’ve got my 5-8pm gig at Buffalo Wild Wings in Naperville.Â  I hit the road right on time and made it to the event that was underway. It seemed like everyone was there .. some new faces and many old friends.Â  It was more of a social event than anything else.Â  I didn’t get a chance to really take a good look at things but .. I’ve already got enough stuff collecting dust. My good friends David Seebach and Brett Daniels drove down from Milwaukee to attend.Â  They were starving so, I suggested the Brickhouse in Downers Grove.Â  It’s a very cool place and the food really good. My personal favorite is the Gun Show Burger .. it’s got a fried egg right on top of the burger.Â  For some reason this post seems to be all about food .. maybe I’m just hungry. 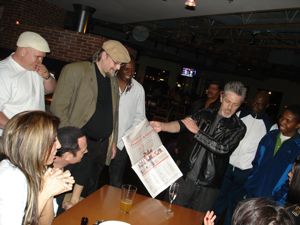 Anyway .. my friend Paul spilled the beans about where we were going and sure enough, the place was filled with magicians.Â  There’s a time and a place for everything .. the next thing you know, the tricks are coming out and everyone is doing their “thing.”Â  It was pretty humorous .. and a little imbarrassing. Â  The waitresses got a kick out of it as this doesn’t happen often .. if ever.Â  It was getting late and I had seen enough magic for one night …

I forgot exactly where I left off .. but I think it was Saturday .. and we slept through the morning contests .. again. I...read more →

So it's Friday night .. most normal people are out .. I'm home giving Snuggles a bath. I do take good care of my pets...read more →

It's Saturday night .. actually it's after midnight so it would be considered Easter Sunday.Â  I've been messing with this new Mac since last night...read more →