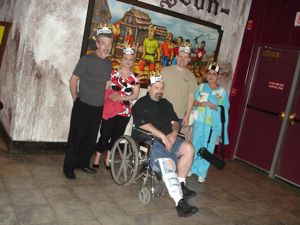 Let’s give this another shot,Â  I had half of this written the other day and it’s lost in cyberspace.Â  Again we’re going back about a month ago, I left off right before my birthday.Â  My brother had recently injured his knee and he was going in for surgery right after Memorial Day.Â  My birthday was on May 23 .. so, we loaded up the van and headed out to Medieval times.Â  Jeff already had some sort of brace on so getting around was a bit difficult.Â  Once we arrived at the castle in Schaumburg, they were very accommodating getting my brother a wheelchair and getting us seated.Â  Joining us for the festivities was Paul, Val, Tony and my mother .. or “Ma” as we call her.Â  The show was a fun time and of course you have to eat with your hands .. like back then.Â  I had Pepsi to keep things authentic.Â  Afterward we came back home and opened a few gifts .. I picked most of them out, as you can imagine I’m difficult to shop for.

We had a little cook out on Memorial Day, I had a show earlier .. so Paul did most of the cooking.Â  I think it was raining on and off .. but we made the most of it.Â  My brothers surgery was the next morning .. and I don’t know about him but, I would have been terrified.Â  He was facing three hours or more under the knife.Â  He tore his acl and his meniscus on his right leg .. goofing around with one of his friends.Â  I can’t get into details as it would be too embarrassing for my little brother.Â  I dropped him and mother off at the hospital and stuck around for a little bit.Â  I had to get home to take care of my zoo, grab some lunch and headed back.Â  After surgery he was pretty much out of it and we managed to get him home.Â  For the next week or so he would be camped out on the couch downstairs.Â  He seemed to be doing alright .. that was until the drugs wore off.Â  It must have been 3am or so when the screams of pain echoed through the house.Â  Let’s just say it was a long night.

Therapy began a few days later and of course, I’m carting him around too.Â  My mother has rehab on Tuesdays and Thursdays.Â  My brothers sessions are on Monday, Wednesday and FridayÂ  .. now you’re getting the picture.Â  I have little time to myself these days.Â  When I have an occasional gig .. I’m glad to get out of the house!Â  My days are long and I don’t know what direction I’m going most of the time.Â  It’s a good thing I’m healthy .. otherwise we would be in big trouble. 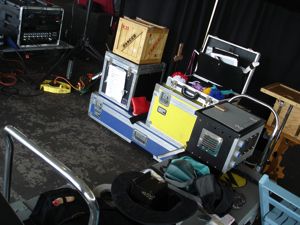 Once again we performed at Carol Stream Fest earlier in the month.Â  As much as I like to prepare for things, it was a challenge to get things under control. We were going to be on the main stage but, the weather was questionable at best.Â  We wound up under the Bingo tent .. ya, my career is skyrocketing.Â  The wind was cutting through and just as we began .. the band across the way started playing.Â  It was a train wreck .. but we did what we could.Â  I licked my wounds and headed home.

I guess we’re just about caught up for now .. lets see 11am mother to a doctors appointment, then Jeff to rehab at noon .. then pick up mother, then JeffÂ  … it never ends.

I've been putting this off .. a year to be exact. I never finished the sad story about losing my friend Tina. Today was a...read more →