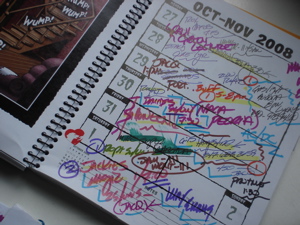 So much to catch up on .. I’ll see if I can fit it all in one post.Â  At the time I’m writing,Â  we’ve been enjoying 70 degree weather here in Chicago and we’ve got a new President from right here.Â  We should all support him and our country and hopefully things will turn around for all of us.Â  He’s got many challenges ahead of him .. but, lets face it .. you couldn’t do much worse than our last choice.Â  Maybe I should give it a shot in aÂ  few years??

It’s been a very busy month for me .. and I’m very thankful that I’m in demand.Â  I’ve barely had enough time to think .. then I’m out the door once again for another gig.Â  That’s my actual desk calendar .. simply chaotic.Â  Just a few weeks ago, I added Buffalo Wild Wings in Naperville to my schedule.Â  You can see magic up close and personal on Wednesdays from 5-8pm.Â  It’s family night and the food is great .. you should stop by if your in the area.Â  Now lets see if I can finally get caught up once and for all. 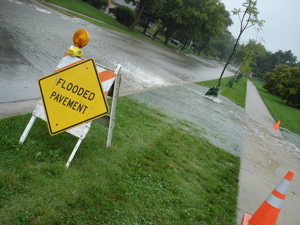 After my trip to Tennessee I returned to record rains in the area.Â  I was lucky enough to get home the day before.Â  The park near my house became a lake that over flowed into the street.Â  WeÂ  were very lucky there was no flooding in our immediate area.

Only days later it would be Jacqueline’s very first show.Â  We had been preparing for her premier for many weeks now.Â  Angel came along to make sure things went smooth.Â  There is so much to learn as the on stage assistant, it can be overwhelming.Â  She did just fine and the show went well.Â  My good friend Paul Lee and Jeremy Schurtz from Wisconsin came to see the show and gave us a hand packing up.Â

We stopped at a near by Culver’s for some lunch.Â  The timing was just right for them to stop by .. I’m glad they did.

Now we’re into October and things are really picking up.Â  I’m scheduled at the Naperville Settlement for three shows a night in the middle of the “Haunted Graveyard.Â  These would be the last outdoor shows of the season for me .. so, I had my fingers crossed.Â  The set-up was pretty cool .. tombstones, fog and a mausoleum as my backstage area.Â  My props were set inside and I could grab them as I needed.Â  The first show went just fine .. then it began to rain.Â  The crowds were still coming through .. and sitting down for a show.Â  I really couldn’t turn them away .. and wound up doing additional shows .. in the rain. 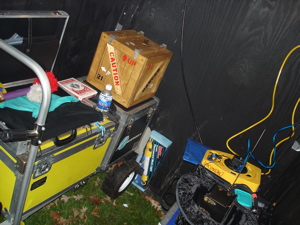 My temporary backstage area offered little protection .. as it had no roof.Â  I must be out of my mind .. in the rain and standing in mud.Â  The next night I spread hay in my working area and that really helped out.Â  This time I would face a new challenge .. the cold.Â  There were even more people showing up for some Halloween fun .. again I wound up adding shows.Â  Next year .. my fee goes up!

We’re almost caught up .. now its the week of Halloween.Â  I’ve still got a few private gigs and then “Jackie’s Magic” on Saturday.Â  Jacqueline was actually scheduled for this weeks shows but wound up sick .. very sick.Â  She’s slowly getting better .. but in the mean time, the show goes on.Â  Valerie and Angel stepped up and filled in for her.Â  On Halloween we found ourselves in the little town of Hampshire, IL.Â  The show went just fine and its always great to see the kids in their costumes.Â  Afterward, Angel was having a little gathering and we had a good time just relaxing for a change.Â  The next night was a big show that featured half a dozen other acts on the same bill.Â  We were closing the show, so we brought in a few extra things to make the it special.Â  We had a little extra backstage help that really made a difference. 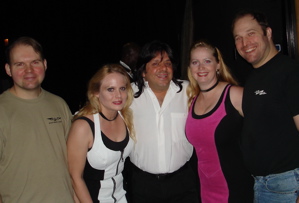 On the far left is Tony and on the far right is Angel’s boyfriend Anthony.Â  They helped things run smoothly and even had everything packed while we were signing autographs.Â  It was getting late .. and of course we haven’t had dinner yet.Â  We joined up with the other acts at the iHop in Gurnee and had breakfast.Â  We all had a good time and it’s even better sharing the stage with some of your friends.Â  Now I think you’re all caught up .. I’ve got to get Rex out for his walk and take mother to her exercise class .. but, I do have tonight off for a change!

Once You Know the Secret …

Where to start, it seems another month has flown by and we're still waiting for summer to arrive. Memorial day was hot .. in the...read more →

It was a long ride up to Gurnee, IL yesterday .. the road construction is ridiculous around here. Angel was in town and joined me...read more →

Last night was a late one .. but this time for some fun. My brother and I went downtown Chicago to see Paul Stanley's solo...read more →