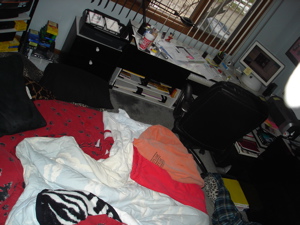 If you haven’t guessed by now .. I’ve been a bit busy these last few weeks.Â  I just wanted to write a quick note before I pass out.Â  It’s been a long day .. I just got home about an hour ago, then I had to go for a walk with my little buddy Rex.Â  Now it’s after midnight and I’ll probably watch an episode of “Monk.”Â  I think it was actually Valerie that got me hooked on the show .. and now she calls me Monk for various reason.Â  Yes, I can be picky about certain things .. I just look at it as being set in my ways.Â  The thing is, the more I watch Monk .. the more I understand why he does certain things, and I would do the same.Â  I’m not saying I’m obsessive compulsive just yet … but, I understand.Â  I actually took a lot of psychology back in college .. and I know a thing or two about this type of illness.Â  Don’t worry .. I think I’ll be OK for now.

Anyway, I just returned from a last minute gig at the Sabre Room in Hickory Hills.Â  It’s actually a pretty fun time working with the other acts and of course the Sabrettes.Â  I’m slowing down .. and I’ll catch up on all this in a day or two.Â  I’ve got some fun stories to fill you in on .. including dinner with and internationally famous magician and friend, Brett Daniels.

We're almost over the worst of winter .. I hope. There is only a few days left of January .. and things are finally starting...read more →

There's actually a littleÂ note in my calendar where I left off last time .. are you ready, April 11th. Â Let's just say I've been preoccupied....read more →

As Long as it’s Above Freezing …

No doubt about it .. winter has arrived in the Chicago area. This of course makes things a bit more challenging when we're out with...read more →