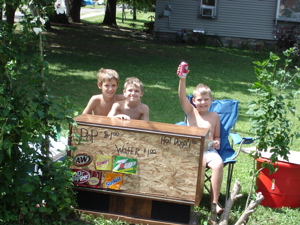 Well, not exactly … I made the journey to Colon Michigan a few weeks back now. One thing after another comes up, and I’m a few adventures behind. Lets see what I can remember from this years Abbott’s Magic Get-Together. As soon as I arrived on Wednesday .. it was right to work. I’m part of the Abbott’s stage crew and we were preparing for the evening show .. and it was a big one, including a 350 pound tiger! My good friend David Seebach was performing and hosting the event. The stage was filled with props and illusions. Our job of course is to make things run smoothly during the show, setting the props, pulling curtains and so on. The first night went off without a hitch .. and no one was eaten by the tiger, always a plus. After the show it was time to “load out” and then get something to eat at the Five Star Pizza. It was well after midnight by the time my head hit the pillow at the Coldwater Red Roof Inn.

The convention consists of contests, lectures during the day and the big show at night. In between events we wander the quiet streets of Colon. Along side the Amish buggies there are yard sales, lemonade stands and even a craft fair. The weather was refreshing .. usually it’s a bit humid this time of year. Thursday was a blur .. but Friday my good friend Devlin was the feature act on the evening show. 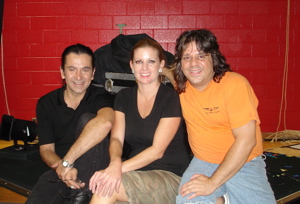 He brought in lots of big equipment and that means lots of work backstage. After the close-up show in the afternoon, it was time for rehearsal. We run through the lighting, music cues and prop placement. It does take some time but it really shows once the curtain goes up. Here we are after the show .. a bit tired, but in one piece.

Saturday is the last day and it’s a long one. Theres a lecture in the morning .. I opted for sleep, I do have my priorities. I had lunch with Carol and Julie at the Magi Cafe and then it was time for the afternoon matinee show. Four big shows down and one more to go.

The stage crew is treated to a pizza party before the Saturday night show and then its back to work. Tonights show featured the Great Tomsoni, a comedic legend in the world of magic. The auditorium was full and Wilma begins with the opening music. After our last show its time to tear it all down and return the stage the way we found it. The crew is nearly finished within an hour after the crowds leave. It was time for me to hit the road and head back home, traveling in the dark of night. Another year has passed and everyone is a little bit older. I’ve been attending every year for over 25 years now .. I’m going to be one of the old timers soon!

You Are What You Eat …

So, I stayed in last night .. which is a rare occasion. A winter storm was heading our way and it was coming fast. We...read more →

I've got a few minutes to write .. so we'll see where this goes. First .. the weather is warming up in the Chicago area...read more →

It's already been a week that we've had little Rex join the family .. and he's doing just fine. Most of the neighbors have come...read more →