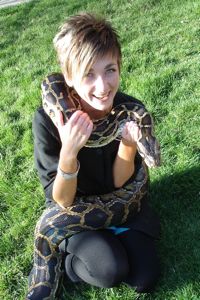 As you can imagine .. I’ve been keeping busy as usual.Â  That would explain the gap between these posts.Â  I’ll have to go back a few weeks and get caught up.Â  I’m on a brand spakin’ new iMac and its pretty sweet.Â  I’m still having a few glitches getting things back in order .. but, I’m almost there.Â  I have regained access to the website so, that’s a good thing.Â  I may even take a few classes so I can actually learn what to do on here.Â  Computers were just a novelty back when I was in high school .. so, I do have an excuse.

Last Friday things were warming up around here and I decided it was time for everyone to get a bath.Â  That’s no easy task around here as I’ve my little zoo includes a macaw, two pythons and a German Shepherd.Â  I literally had ten things going on at once.Â  While one of the snakes would be soaking in the shower, I would be cleaning cages.Â  I had Jenna, the macaw getting some fresh air on the porch while Rex was running in the backyard.Â  My friend Amy came over to give me a quick hair cut in the middle of the madness.Â  She couldn’t resist getting a pic with Monty.Â  After the snakes were back in their cages it was time for Rex’s bath.Â  I hooked up the hose out back … and we both got a bath.Â  Now I was soaked to the bone and it was Jenna’s turn, she’s the parrot of course.Â  I turn on the shower for her and she goes back and forth on my outstretched arm.Â  Last but not least, I hopped in the shower after to clean up and meet up with some of my friends at the Magic Masters Banquet. No my day wasn’t over just yet.

I think it was almost 9pm when I arrived and the show was just getting underway.Â  We made our way up to the balcony for some of the best seats in the house.Â  The show was fun and it was good to see that magic is alive and well in Chicago.Â  Afterward we grabbed a table at a nearby restaurant and shared a few fun stories. By now it was getting late and I had done enough for a mere mortal …

Something is up ... the State Police have called off the search today for my friend Stacy Peterson. I was out just the other day...read more →

Last night was a late one .. but this time for some fun. My brother and I went downtown Chicago to see Paul Stanley's solo...read more →

The Big Night Out …

Some days are busier than others .. my previous post is a good example of just that.Â  The following day nothing eventful occurred other than...read more →