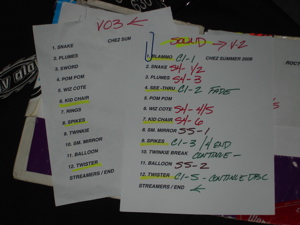 We’ve been preparing for our summer season for weeks now. Our first festival was in Carol Stream just yesterday .. and it was a hot one. The weather has been questionable all weekend with storms, rain and wind passing through our area. I was ready for just about anything .. but, it was still a difficult set up. Only minutes before we left I changed a few things on the show list as the wind would make things even more complicated. As you can see two different versions of the show.

The festival grounds were wet, as to be expected and the backstage area was tight for me to back the van into. We used our ramp to get the props up to the stage and began the setup. We had to work around two other acts sharing the stage, and that can be tricky. We have big show with a lot of equipment. The wind was cutting through but the skies cleared up for us to perform. The temps started to rise and it was humid .. we were melting in the sun. Former Chezababe Juli joined us on stage as a volunteer for our Spikes illusion. It was a while back when she did shows … so, it was all new to her. 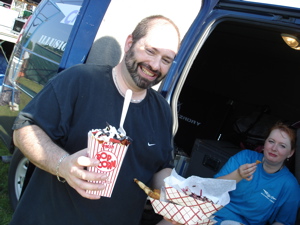 In between shows we had a chance to sample some of the fair food and it was pretty good. My brother Jeff found some unusual items including a deep fried ear of corn. I of course couldn’t fill up on any of the junk as we had another show to do.

After our second show was over .. it was time to pack it up and roll everything back down the ramp into the van. It was a long, hot day .. but we all survived. Our summer season has only begun …

My friend Greg got me hooked on another magicians blog .. and he writes like everyday .. he's killing me. You too can check it...read more →

It was One Long Day …

This is actually the second time I'm writing this entry, the first is lost somewhere in cyberspace. So .. we'll start with my gig on...read more →

I didn't get a chance to write since last week .. but I did have a short road trip. My good friend, Tom Rozoff was...read more →